“Tom’s poor mother and sisters travelled the same road out of his mind. At first he pined for them, sorrowed for them, longed to see them, but later, the thought of their coming some day in their rags and dirt, and betraying him with their kisses, and pulling him down from his lofty place, and dragging him back to penury and degradation and the slums, made him shudder. At last they ceased to trouble his thoughts almost wholly. And he was content, even glad: for, whenever their mournful and accusing faces did rise before him now, they made him feel more despicable than the worms that crawl.” (p. 178-179)

Why do we lose our childhood memories?

How can we bring some memories back?

Throughout The Prince and the Pauper, we get a glimpse of what royal life is like. One of the biggest changes for Tom was getting used to all the people whose soul goal is to help you as the prince/king. We continue exploring that in the Chapter 30 Historical Tidbit…

YEOMEN OF THE GUARD

Tom is started to get used to the royal treatment after spending so much time trapped in the palace:

“It came to be a proud pleasure to march to dinner attended by a glittering procession of officers of state and gentlemen-at-arms; insomuch, indeed, that he doubled his guard of gentlemen-at-arms, and made them a hundred.  He liked to hear the bugles sounding down the long corridors, and the distant voices responding, ‘Way for the King!’ ”  (p. 177)

Who were the Yeomen of the Guard?

You can tell a lot about a person by the way they carry themselves. Then again you can also fake confidence based on how you position your body. The vocab word today revolves all around body language. The word is…

Keep reading or watch the video below see how the word ‘bearing’ is used in The Prince and the Pauper.

In England, as well as many other countries, we have seen many examples of leaders who use intimidation and threats to keep their people in control. In a modern-day context, we can see examples of this in workplaces and other settings as well. Today’s Fun Fact dives into that particular style of leadership; The Prince and the Pauper Chapter 29 Fun Fact focuses on…

“About ten o’clock on the night of the 19th of February they stepped upon London Bridge, in the midst of a writhing, struggling jam of howling and hurrahing people, whose beer-jolly faces stood out strongly in the glare from manifold torches—and at that instant the decaying head of some former duke or other grandee tumbled down between them…the late good King is but three weeks dead and three days in his grave, and already the adornments which he took such pains to select from prominent people for his noble bridge are falling. ” (p. 176)

THE HEADS ON LONDON BRIDGE

When Miles and Edward return from Hendon Hall, they get caught up in a crowd on the London Bridge. While they are there, one of the heads on on display falls and causes chaos on the bridge.

“…and at that instant the decaying head of some former duke or other grandee tumbled down between them, striking Hendon on the elbow and then bounding off among the hurrying confusion of feet. So evanescent and unstable are men’s works in this world!—the late good King is but three weeks dead and three days in his grave, and already the adornments which he took such pains to select from prominent people for his noble bridge are falling.”  (p. 176)

Why were there heads on the London Bridge?

Our vocab word for The Prince and the Pauper Chapter 29 doesn’t get used very much anymore. But occasionally it will still come up in modern texts! The vocab word is…

Keep reading or watch the video below see how the word ‘by-and-by’ is used in The Prince and the Pauper.

There is now an audiobook version available for the Pontes Books White Version of The Prince and the Pauper!

Where can you find the audiobook?

You can find the audiobook in two places: Audible and Amazon (though both technically are through Audible).

If you have any questions, contact us at admin@pontesbooks.com.

Have you ever been in a crowd and it suddenly went silent? Have you ever been a part of a moment of silence? Whether it’s planned or not, the idea of an entire crowd going and remaining silent is always an impressive feat. Today’s Fun Fact for The Prince and the Pauper Chapter 28 focuses on…

“A faint tinge appeared for a moment in the lady’s cheek, and she dropped her eyes “Hendon made no outcry under the scourge, but bore the heavy blows with soldierly fortitude. This, together with his redeeming the boy by taking his stripes for him, compelled the respect of even that forlorn and degraded mob that was gathered there; and its gibes and hootings died away, and no sound remained but the sound of the falling blows. The stillness that pervaded the place, when Hendon found himself once more in the stocks, was in strong contrast with the insulting clamour which had prevailed there so little a while before.” (p. 173)

A Moment of Silence

Typically, a planned moment of silence is a gesture to show respect, often for someone who has passed away, or often for a tragedy where many people die. Often times they can be 60 seconds long, but really can be any length of time.

The first recorded official moment of silence for someone who died took place in Portugal on February 13, 1912. The moment was for José Maria da Silva Paranhos Júnior, the baron of Rio Branco, Brazil. It was for ten minutes. The same year many places held a moment of silence for the Titanic and Maine shipwrecks.

So what about those silences that are unplanned? Often times these are referred to as an awkward silence, dead air, or a pregnant pause. Most people have experienced these at some point in their life. Some people claim that these silences often happen exactly 20 minutes after the hour (6:20, 2:20, etc.)

There are two different types of susperstitious reasons people claim as the reason for why this happens. The first is that some people believe that angels are singing, and the all humans subconsciously get silent when that is happening. Another susperstitious explanation is that since Abraham Lincoln died at 7:20, people naturally continue to observe a silence at 20 minutes after the hour. However, both of these explanations don’t have anything to support them.

There is also a more scientific explanation, though this one doesn’t really relate to the 20 minutes idea. Some people claim that our human instincts mostly revolve around silence. When we grow silent as a group, our instincts are kicking in to ensure there is no danger nearby. Once we are sure there is no threat, we continue with our conversations.

Our Historical Tidbit for today focuses on yet another moment in The Prince and the Pauper where Mark Twain throws out a reference and does not include any context whatsoever. Today’s Historical Tidbit is about…

Edward finds out that he was going to be whipped for speaking out on Miles’s behalf. The paragraph excerpt below breaks down what is going through his mind in that moment.

“The King was seized.  He did not even struggle, so paralysed was he with the mere thought of the monstrous outrage that was proposed to be inflicted upon his sacred person.  History was already defiled with the record of the scourging of an English king with whips—it was an intolerable reflection that he must furnish a duplicate of that shameful page.”  (p. 172)

So who was the king who was whipped in the past? King Henry II

Who was Henry II?

Why was he whipped?

Our vocab word for The Prince and the Pauper Chapter 28 focuses on a commonly-used word. It typically evokes a particular image in people’s minds. The vocab word is…

Keep reading or watch the video below see how the word ‘mob’ is used in The Prince and the Pauper. 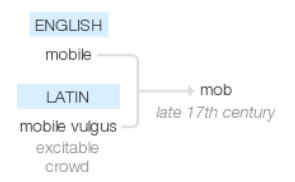